One Hour With The Scum Of The Earth

One of the nice things about 'Scum of the Earth' is that it's pitched at around the six unit mark, which seems to make it a perfect set of rules to use for the scenarios in One Hour Wargames. I decided to put that to the test this evening, and played the Control The River scenario using two South American Wars of Liberation forces.

I generated random forces, with a slight fiddle to the tables to limit artillery to one piece maximum. The Royalists got an artillery piece, along with four infantry and some skirmishers. The Patriots had four infantry and four cavalry. I decided I wanted to try out characters and traits as well. The Patriot Llanero cavalry was rated as Fierce, giving them a bonus in close combat, but to offset this, two of their infantry units were classed as Rabble. In addition I gave each side a musician, standard-bearer and sergeant to assign to three different units, allowed two random units on each side to be Steady, allowing them to resist fire better, and made one unit on each side Impetuous, which meant that they advanced towards the enemy if under ineffective fire.

I didn't keep detailed notes; keeping track of the game was work enough. The patriots put their cavalry and a particularly steady infantry unit on once flank, relying on their less useful infantry to take, or contest, the other ford as best they could. The Royalists put the gun and skirmishers on one flank, and massed their infantry on the other. I randomly scattered some additional rough ground around the board, as this style of game really needs more rough than the scenarios usually provide. 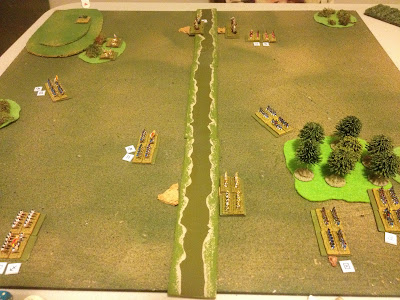 On the one flank there was a fierce firefight across the river (impassable except at the fords). The Royalists got the better of it, driving the Patriots back into the woods, and advancing to take the objective. The Patriots made a bold try at a counter-attack, but it never really came off. On the other flank the cavalry swept over the river, and easily overwhelmed the Royalist gun. But both units came unstuck against a stolid infantry unit that saw both of them off, one by rout and the other by elimination. Cavalry is useful under these rules, but with only three actual figures per unit they are somewhat brittle if things go against them.

The lone Patriot infantry unit on that flank was left fighting alone, which it did with some skill, holding firm against both Royalist musketry and bayonets, and inflicting more hits than it took. 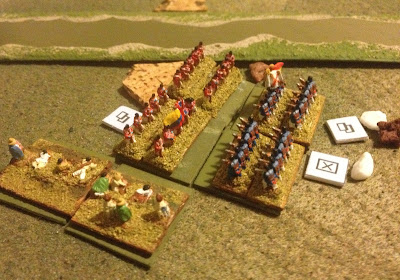 However eventually reinforcements arrived from the other flank, where the Patriots had finally scattered, and the brave soldiers of what you can see was The British Legion, were forced to withdraw. 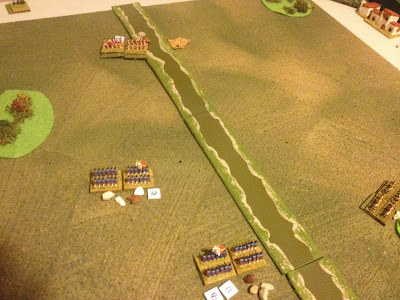 So, another Royalist victory.

I tried a few rule changes which are under consideration: clarified movement, and a more logical effect for rough terrain, as well as a 6" rout move which kept units in play for a lot longer, and allowed both sides a chance to regroup and reorganise. I didn't feel there were any problems with any of the changes. Keeping track of the abilities wasn't too bad, but I'm not sure I'd want any more in play than I used. I never really got a feel for how artillery worked in the game; the Royalist gun fired one shot before its crew were put to the lance.

The game played out in eleven turns, which seems to be par for the course in the OHW scenarios. They did seem to be a suitable set of rules for trying the scenarios with; I shall give them another go at some point.

Email ThisBlogThis!Share to TwitterShare to FacebookShare to Pinterest
Labels: liberation, report, scum of the earth