To be honest this game wouldn't have got a blog post of its own, but it's the first time I've played it this year, so it counts towards my 52 Games project.

It's a light and fast card-game that my wife bought at MOAB for us to take on holiday and which we managed to no play on holiday at all. The premise is that the players are baby dragons and it's bedtime - kind of obvious really. Like any small animals they don't want to sleep, and instead want to play, and what dragons play at is collecting and hoarding gold. 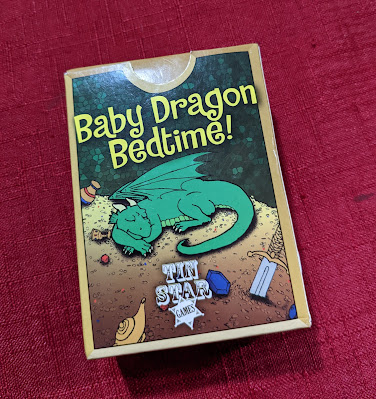 It's basically a very fast memory game. Most of the cards for the game are spread, face down, between the players. Each player gets a deck of cards containing two Peek cards, two Grab cards and one Flip card. There are no turns. Once the game starts, each player flips over the top card of their deck and can choose to follow its instructions, or simply flip the next card. Cards then go on your discard pile. A Peek card enables you to look at a card in the middle, a Flip means you turn it over (or put it face down if it's already face-up) and a Grab card means you can take one card from the middle and put it in your discard pile. When you run out of cards then you flip your discard pile, that becomes your deck and you keep going. Obviously cards you've grabbed will form part of your next deck. You do this at whatever speed you like; the other players will be doing the same.
Grabbed cards can include more action cards, but can also include Gold or Hoard cards, which are worth VPs. You must try and avoid the Dust Bunny and Chewing Gum cards, though, as they are worth negative VPs 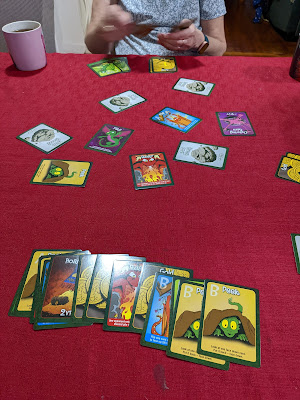 If you think you've got enough gold then you can choose to go to sleep, and you stop playing. When either only player is still awake, or if all of the cards on the table are face-up, the game ends, and you count VPs 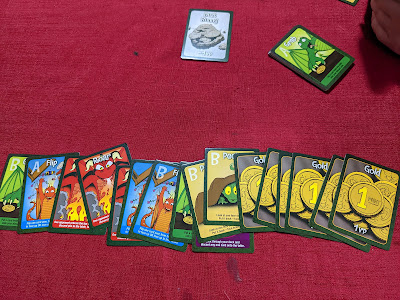 It's simple, it's fast and it's stupid. And it's fun. It also plays in about five minutes. We enjoyed it with three. It takes up to seven players, which I imagine would be utter chaos.
So that's another 52 Games entry.
*Previous Tin Star Games products on this blog have been Partners, There's Been A Murder and (of course) Elon Musk's iPod Submarine.
52 Games - Game 66